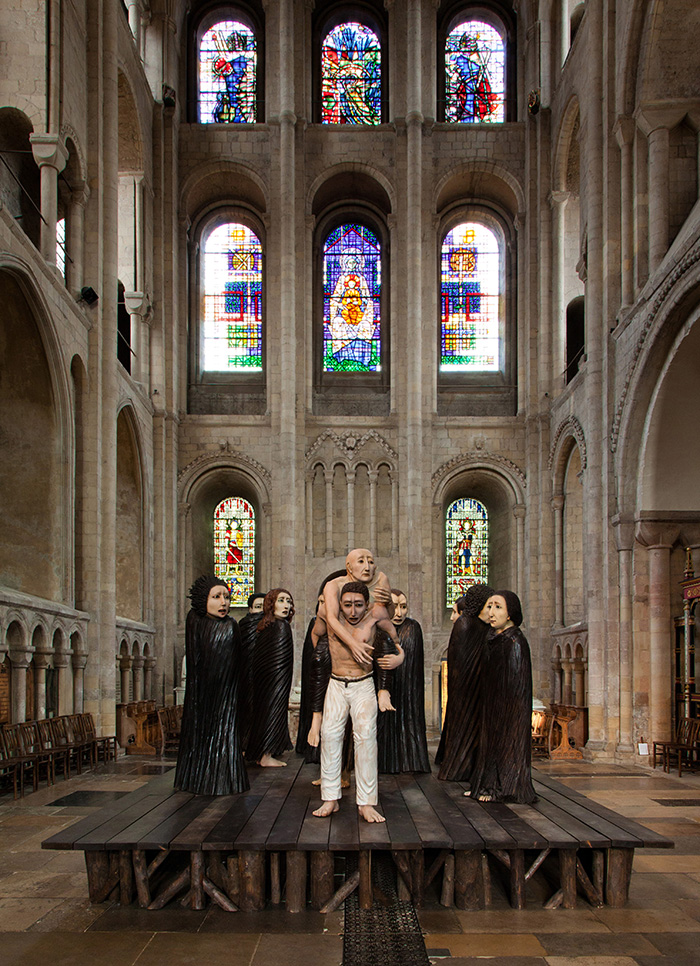 In 2015 Ana Maria Pacheco’s sculpture was exhibited at four different locations in Norwich: at Norwich Cathedral, The Gallery at Norwich University of the Arts,The Cathedral of St John the Baptist and Norwich Castle Museum. The exhibition at Norwich Castle Museum focused on a set of eight polychrome alabaster reliefs. This exhibition was extended to March 2017, when the work finally left for inclusion in Dispersing the Night – Sculpture by Ana Maria Pacheco at Salisbury Cathedral (April-July 2017).

Shadows of the Wanderer was installed in the North Transept of Norwich Cathedral from March to December 2015 and during the time it was there the Cathedral’s Canon Librarian wrote the following:

Ana Maria Pacheco’s Shadows of the Wanderer in Norwich Cathedral

Although it was clear from the beginning of the planning for this installation that these sculptures (because of their sheer physical size) would have a significant impact on the space of the North Transept, none of us had any sense of the extent to which these figures would inveigle themselves into the daily life of the Cathedral. They have in a real sense become part of our community: silent observers, participants, and commentators in the daily rhythms of our common life. Those who come to see them know themselves to be challenged and interrogated by them.

Part of the power of their presence has to do with the aptness of their proportions to the space. The proportions of the sculptures alongside the Romanesque arcades, of the comparatively narrow but high space of the Transept containing the platform and more-than-life-sized figures, might have been made for one another. Although distinctly contemporary, the figures also have a Romanesque, monumental quality like that of the sculpture of St Felix over the exterior of the Bishop’s Door to the Transept. The swirling form of the carved robes of the figures even echoes that of the spiral columns in various parts of the Cathedral. Although the literature about the sculptures depict them in artificial light within a darkened space, they also respond to the daily progression of natural light around the Transept each day, highlighting different individuals and features with each passing hour. Those of us who encounter them each morning on the way to matins have continued to be startled and taken aback by their presence long after we should have become inured to them. I attribute this to the extent to which they have become ‘real’ to us.

We also continue to be struck by the impact the sculptures have on our visitors. No sooner have we put out a few hundred of the free leaflet than they have disappeared. We’ve lost track of the number of times we’ve had to photocopy more. The catalogue that goes with them has been a big seller in our shop. The lunchtime talk that we put on after the installation attracted 130 people even though Ana Maria Pacheco was not able to be there on the day. I cannot remember a time during visitor hours when there have not been people studying, walking around, and photographing the installation. It has certainly brought a new audience to the Cathedral – people who have come to see the art, but who then have also noticed the power of its context (so unlike what it would have in a ‘white cube’) and gone on to see the rest of the building. As a result of this installation, we have an audience that sees the Cathedral in a new light – as a place that not only engages with contemporary artists but also places them in the context of an ongoing tradition of art in and for sacred space.

Having this installation has enabled us to see the Transept, previously an empty space to pass through, in a new light. Now we can see its potential not only as a setting for other potential installations but as a sculptural space in its own right, with a distinctive architectural language and spiritual sensibility. Long after the Shadows of the Wanderer have moved on, however, I suspect that the space will continue to be haunted by the memory of their presence.